The Communist Gallery’s main form of intervention is the ‘guerilla TV Station’ or CGTV – an entirely freestanding and independent broadcasting station in which individuals and groups can show 1 minute films to an extended public. The CGTV Station viewing booths are usually placed in public spaces which become a focus for interruptions and performance. 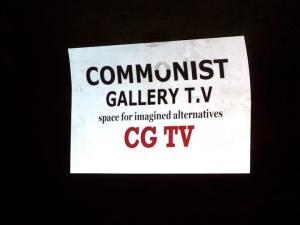 This project is completely unfunded and receives no support whatsoever from any arts organisation or political party but we are open to work with people with similar political aims and learn from their experience.

The project seeks to undermine the practices, privileges and protocols of cultural industries.

(the following was written by Andrew Cooper; one of the instigators of the Communist Gallery)

The representation of art in the business model and the neutralization of its power-What is to be done? 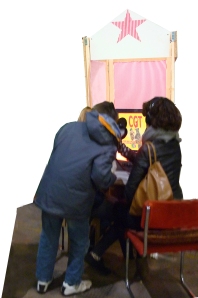 What is it that we’re really trying to do? Many doing art projects don’t seem to really ask this. I don’t think those involved with art have asked this enough, even for example why art is important in a school. It’s interesting that when something is threatened you start to realise how important something is, I think one of the reasons I think arts important is that it is a domain where we decide what areas we problematize.  Unlike the Grotesque Image of Culture Deleuze describes-

” ……….Such is the origin of the grotesque image of culture that we find in examinations, government referenda as well as news paper competitions (where everyone is called upon to choose according to his or her own taste, on condition that taste coincides with everyone else). As if we would not remain slaves so long as we do not control the problems themselves, so long as we do not posses a right to a participation in and management of the problems. ” (Deleuze ‘Difference and Repetition’ p.197)

This is precisely one reason why art and the humanities are so important. 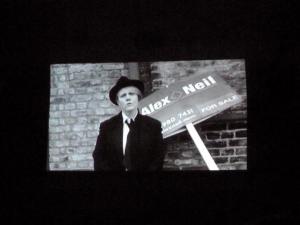 But the way in which we are supposed to ‘represent’ ourselves so we can be ‘recognised’ as artists is part of the problem of inoculation because this so often becomes the ‘IT’ that the work does in the Real. For example; statement of cultural capital followed by description of work.This is a cultural problem and can only be addressed collectively as people take personal responsibility and it’s bloody difficult partly because it’s taboo to talk about.

I suppose what I’m saying is we need to move away from the business model in all it nefarious forms, even those masking as ‘social concern’ . 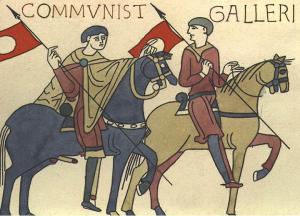 The process of thought in culture needs to move from a descriptive (marketing model) to a real social methodological approach, something that really reacts with, to or against something. It is this that needs to be at the front not the image or representation of the artist which can be recognised.

I would like to propose the following points for consideration in moving towards a manifesto. Any feedback or comments would be welcome: –